In June the NCUA board reviewed the recommendation by NCUA’s Office of Examination and Insurance to consider releasing a proposal in the coming months to incorporate an “S” to the credit union CAMEL Ratings. The Examination and Insurance staff believe the changing size and complexity of the credit union system warrants its adoption. At this time, it appears the agency will draft and issue a proposal for public notice and comment which could take several years to implement.

In the meantime, it has been publicized at several conferences I have attended recently that the agency is retooling and attempting to standardize the current IRR supervisory procedures. This will include an updated examiner’s guide, streamlined procedures, predefined premiums for non-maturity deposits (NMDs) to be used by the examiners, and updated risk rating categories. This is expected to be fully rolled out by the end of 2016 and may be seen in the field as soon as examiners have received training, which is scheduled to start sometime in July.

I have talked with several capital market specialists from NCUA over the past couple of years and expressed my frustrations regarding the lack of consistency in how regulators treat the measurement, management, and monitoring of interest rate risk from one credit union to the next and from one state to the next. The biggest variable and issue that arises in the estimation of IRR frequently resides in the valuation of non-maturity deposits. If NMDs are not recognized as holding any value, then IRR analysis may indicate high levels of IRR and if managed to this scenario, the credit union will sacrifice earnings. If NMDs are treated with longer average lives and lower rate sensitivities, these deposits provide substantial mitigation and allow the credit union to take on longer-term assets, which often results in examiner criticism. As I expressed how tiresome the continual debate and valuation of NMDs in the NEV calculation has become, they expressed the same frustration and weariness on this topic.

The presentations by the NCUA representatives outlined the upcoming changes and emphasized the purpose and benefits to credit unions as follows:

The benefits to NCUA were listed as:

At this point I would like to emphasize that this change does not replace the credit union’s responsibility to independently measure, manage, and monitor their IRR, nor is it intended to replace strong, supportable, empirically derived assumptions. The changes are being implemented by NCUA to help the regulatory process and therefore should not be blindly adopted by the credit union. I recommend modeling and discussing this analysis as an alternative scenario and evaluating it based on its merits and limitations.

The NEV supervisory test calculation will use book, base, and up 300 bp valuations for assets straight out of the credit union’s model. The examiner will assess the model’s asset valuation for reasonableness, which is consistent with their current practices. The examiner will use the current asset valuations and apply the following premiums for NMDs—1% in the base case. After applying base case premium, a premium of 4% will be applied in the up 300 from the base case, resulting in a total premium of 4.96% from the book value. Using these premiums, the NEV sensitivity and the post shock NEV value will be recalculated and the results will fall into 4 risk ratings (see the chart below). The definitions have also been adjusted to reflect the new treatment of NMDs with low-risk category defined as post shock NEV above 7% and valuation change < 40%; moderate category is post shock NEV between 4% and 7% with valuation change from 40%-65%; and the high category at post shock NEV between 2%-4% and valuation change between 65%-85%.

The L component of the CAMEL rating will be assessed a risk level that will not be lower than the determined risk level. The examiner will have some discretion to adjust risk rating up based on credit union management and understanding of IRR. As it stands now, NCUA indicates very few credit unions currently fall in the extreme range.

Understanding the changes will be important to assisting in the regulatory process and will hopefully reduce the confusion and inconsistent application by examiners in the area of interest rate risk. 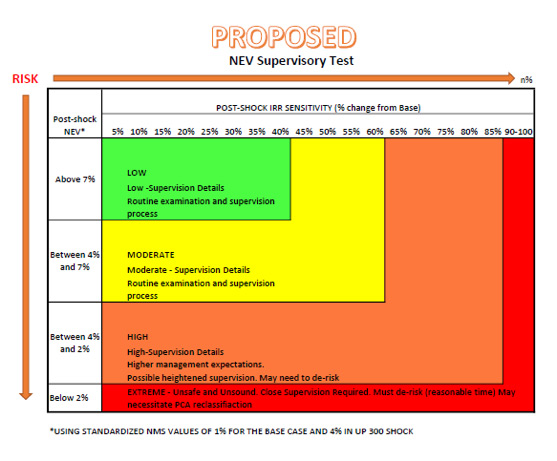