The Financial Institution of Your Dreams

The January 2016 Consumer Report magazine front cover reads, “Get the Bank of Your Dreams.” The focus of their main article ties in very closely with the topic I want to address. When people I meet find out I work with credit unions, they often ask, “Why should I join a credit union instead of a bank?” Many of us in the industry give an answer about the benefits of being a member vs. a depositor and the credit union philosophy of “People Helping People.” While I believe these reasons are solid and go a long way towards retention, they usually do not seem to resonate enough with a person to compel them to make a change. When I tell them that credit unions usually have higher deposit rates and lower loan rates, their interest spikes. There are many reasons why a credit union might be the best choice for financial services. While some of the reasons may be ambiguous and hard to measure, others are clear and distinct.

Because of acquisitions and mergers, today there are 4 mega banks that hold a large share of the market. That being said, there are still many alternatives for financial services. Consumer Reports found many smaller banks and credit unions that provide compelling alternatives for customers dissatisfied by or uninterested in big banks, and there are quite a few more options than people may realize.

Credit union members were among the most highly satisfied overall and ranked at the top for in-person customer service and lower costs while the big four banks landed near the bottom of the Consumer Reports rankings. According to Moeb Services, a research services firm in Lake Forest, IL, about 80 percent of credit unions offer free checking vs. only about half of conventional banks. Fees still creep in but on average, credit union members pay annually only $71 per year for checking while bank customers pay $183, according to a study of all transactions and fees in more than 16,000 bank and credit union accounts by Victor Stango and Jonathan Zinman, professors at the University of California, Davis, and Dartmouth College, respectively. In addition, we know that big banks seek out and cater to well-to-do customers while credit union products and services better serve the average consumer, and they customize their services to meet the needs of their unique fields of membership, and have the ability to better reach underserved communities.

As mentioned above, credit union members also benefit from slightly higher interest rates on certificates of deposit and significantly lower rates for credit card, unsecured, and auto loans. In 2015 credit unions outpaced commercial banks across all consumer lending and asset quality categories, according to research conducted by Callahan & Associates on the quarterly data released by NCUA and the FDIC. Credit union loan portfolios rose by 10.7% annually compared with 6.6% for commercial banks. Jon Jeffreys, managing partner at Callahan & Associates, is quoted as saying, “Credit unions continue to provide American consumers outstanding value in an increasingly competitive landscape for financial services, and it shows, as the not-for-profit cooperative model continues to produce outstanding growth metrics across the board.”

At Mark H. Smith, Inc., we have always enjoyed working in the credit union industry and our association with honest, hardworking, and friendly people. While big banks are best known for convenience and technology, credit unions can grow their business by focusing on the areas where they are exceptional, which are in-person customer service and lower costs.

Below are some graphs comparing rates between credit union and banks for 7 products. This data was pulled from historical rate information compiled using SNL Financial going back to 2007. These graphs clearly depict some of the measurable and financial advantages of choosing a credit union. 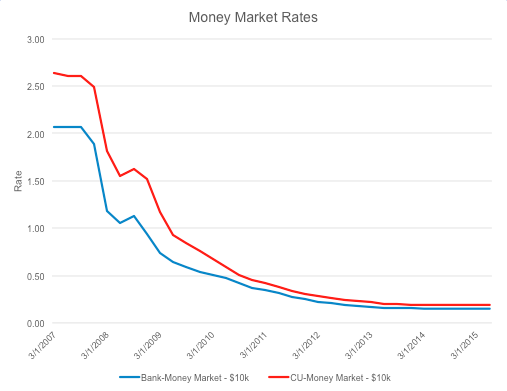 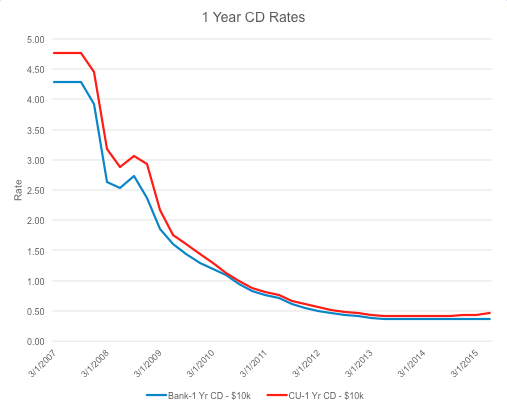 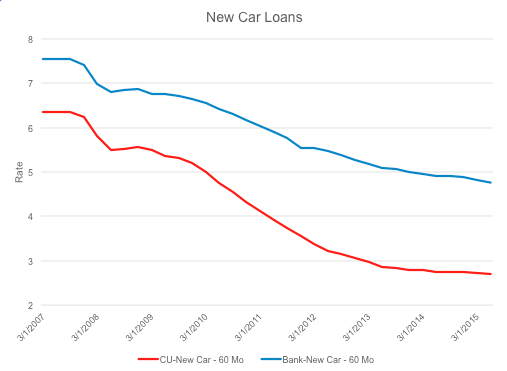 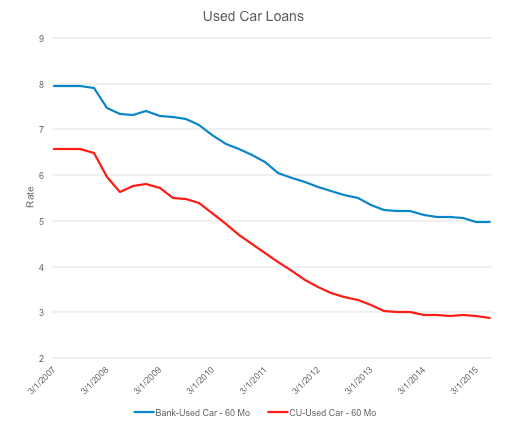 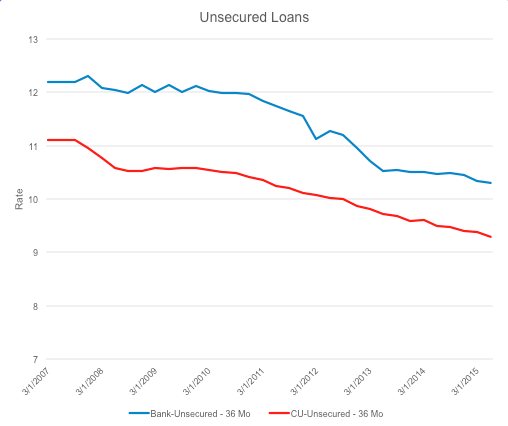 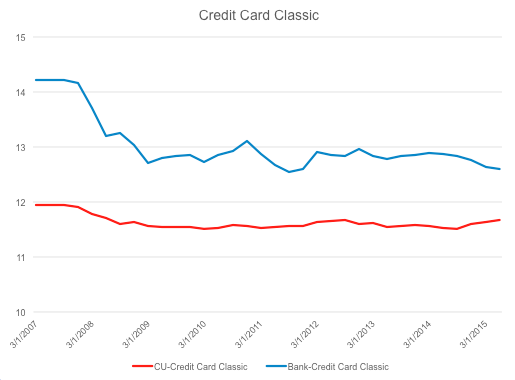