Are Credit Union Deposits Less Rate Sensitive In 2016 Than 2004?

A rate sensitivity analysis is very useful when attempting to determine how a change in the Fed Funds rate will impact a credit union’s cost of funds. As we have performed these analyses this year to help clients and prospects, we were somewhat surprised to observe that a large number of credit unions did not raise their dividend rates on regular shares or drafts during the last rate cycle starting back in 2004. To further explore how common this practice was, we decided to look at the complete call report database to see if this was somewhat isolated or more universal in the industry.

A beta, or rate sensitivity factor, displays by what percentage the deposit rate adjusts based on a given change in a driver rate—in this case, the Fed Funds rate. Based on the average rate paid by credit unions from call report data, the analysis shows the beta on deposits in the last rate cycle starting in 2004 was dramatically lower than the previous rate cycle. This was especially true for regular shares and drafts, which saw drops in the beta from 0.4260 to 0.1952 and 0.1325 to 0.0299 respectively. (See the graph below.) This would support the conclusion that industry wide, deposit rates were much less sensitive to changes in the Fed Funds rate during the last rate cycle. 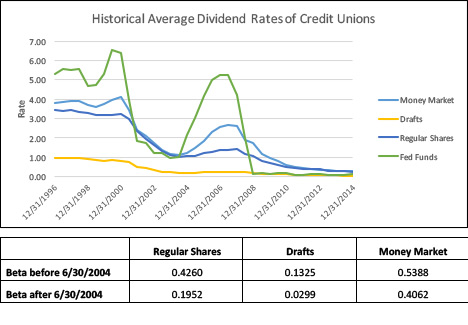 After observing some credit unions not change their regular share and draft rates at all, we would expect to have seen funds leave these credit unions to pursue higher available yields. Surprisingly, that did not occur. In fact, in further analysis, there was not even a noticeable difference in the average life of deposits during the time when the credit union did not increase rates and when the Fed Funds rate did increase. The common belief has long held if financial institutions do not pay a more competitive rate on their deposits, then the money will leave. Why then did the money stay at these credit unions when they did not raise their rates at all?

Another possible reason why those credit unions did not see a large outflow of deposits is because many members enjoy the services from their credit union more than a higher deposit rate. They want to stay at the credit union because of the convenience and the exceptional and friendly service, combined with new technologies they have come to expect. If the credit union is able to save money by not raising dividend rates, it may provide resources that can be spent on extra services.
In this prolonged low-rate environment, members are getting used to low deposit rates. Many financial institutions have eliminated interest-bearing checking with no plans to reintroduce interest-bearing checking when rates go back up. Based on call report data, non-interest-bearing checking appears to be the new norm, and the longer we stay in this low-rate environment, the more credit unions and depositors will be removed from expecting earnings on checking accounts.

How deposits will behave in the future and whether they remain less rate sensitive, move back into requiring higher yields, or move to other investments outside the credit union remains a significant unknown. It is possible due to the financial crisis that deposits have been temporarily less rate sensitive, and as the economy returns to normal levels, depositor expectations and behaviors may change. The recent lower rate sensitivity on deposits is no guarantee of the behavior in the next rate cycle. Conversely, depositors may have evolved and reprioritized safety, liquidity, and services over earnings. Either way, having solid segmentation strategies in place will give the credit union options to maximize opportunities and balance services with rates. Always evaluate and prepare to capitalize on the possibility that members may not expect as high of a rate as previously thought. Be careful not to quickly raise rates on deposits just because that is what you have always done or because the credit union down the street did. It is possible deposits are not as rate sensitive as they used to be.